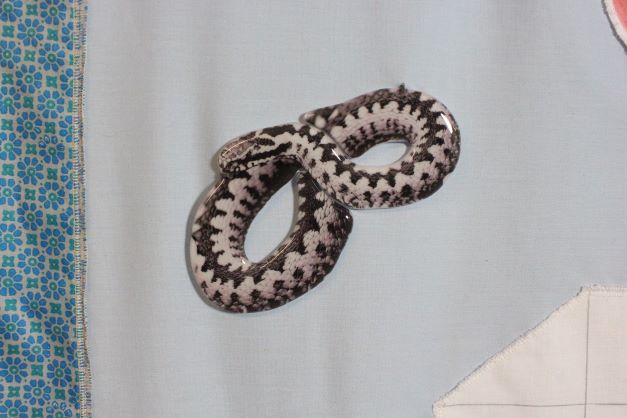 There’s a delicious in-between point when a new work starts to come together, but while there’s still much to do, that you begin to know you’re onto something.

Here it is: my Schrödinger’s Dementia banner. There’s heaps of work to do on this. I want to do more badges with more imagery around memento mori themes, and the brain will become smaller and a badge too – it’s fabric at the moment. The cube will be more transparent, and there may be more fabric lettering around the edge. But I like the way it’s looking so far…..do let me know what you think

For reasons I can’t explain, even to myself, I’ve been wanted to make a banner as a home to some of my big ‘Essex Crystal’ brooches for some time. Maybe it’s because I made a banner a number of years ago for Treacle Market, and for several other community events, and I love the casual but blatant look to them, as well as the domestic materials and broad brush when it some to technique.

It might be that I saw the wonderful exhibition of protest banners at the Textile Biennial in (I think it was) 2019. There’s something declamatory about a banner.

Anyway, I’ve talked about my ‘Schrödinger’s Dementia’ concept, and the memento mori ring that I had made as a result of it before.

My Schrödinger’s Dementia work uses a somewhat suspect reading of Schrödinger’s cat theory to explore my fear of dementia, which comes from watching my mum’s slow decline with the disease, as well as my own experience of memory loss and forgetfulness that comes with the menopause.  I’ve written about this here, if you’d like check it out.

To add a celebratory note, but also keep it weird, I’ve peopled that banner with a number of glass badges that draw on my research into weird Georgian and Victoria Jewellery, and memento mori imagery – a material culture which was embraced and used my women. These are big, broochy, badge weird objects that are sewn on to the fabric. I’ve used fused glass, photographic imagery and a clear cap to give them a bit of optical zing, and a softly flat appearance that plays with the dimensional nature of the photographs

Around all this, I mean to echo the invisibility of women’s experience, and a celebration of the strategies and actions that women take to live well, with or without dementia. It felt to me that the declamatory nature of a banner would be a good way to shout about things that have been kept under the radar for a long time, especially if you are a quiet person and not inclined to shout. By this I mean menopause, really, but also that we don’t often hear directly people who have dementia, which has a higher incidence in women rather than men, as Dr Lisa Mosconi points out in her books and social feeds. I recently read Wendy Mitchell’s book, ‘What I wish people Knew About Dementia’, and one of the things that sang out to me, was what a shock to actually hear the voice of someone living with this disease. I’m all too often aware with mum how we have to speak for her in situations which are too complex for her to understand, and I’m sure she is often silenced when in fact she could speak.